The Mona Lisa, an immersive exhibition 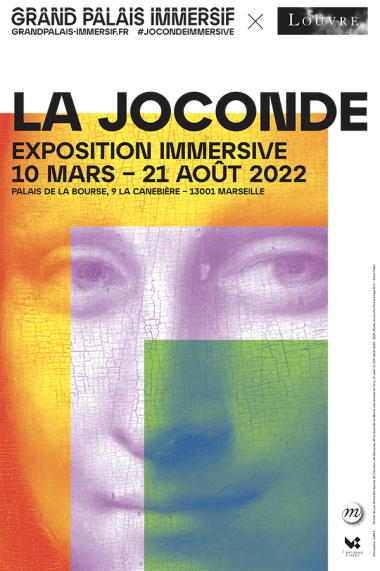 The Mona Lisa, immersive exhibition was presented from March 10 to August 21, 2022 at the Palais de la Bourse in Marseille. A focus of the exhibition is currently presented in the room "Deep Space 8k", the reference of immersive projection, at the Ars Electronica digital art festival in Austria!

The Palais de la Bourse welcomes in its Grand Hall The Mona Lisa, an immersive exhibition, a fully digital multisensory experience of 600m². Why is the Mona Lisa the most famous painting in the world? The answers to this apparently simple question are varied, complex and surprising, giving visitors an insight into part of the myth and above all into the work itself, beyond any false mysteries and clichés. The exhibition is an invitation to rediscover Leonardo da Vinci’s masterpiece through stories and sensory experiences that take place on different levels: - the circuit is punctuated with encounters with the “landscape-skin” that envelops the entire exhibition space. It immerses visitors in a place inspired by the works of Leonardo da Vinci (1452 - 1519), such as the Mona Lisa, Virgin of the Rocks and Saint Anne and offers interactive experiences for the public. The landscapes from these works come together and interact to create a panoramic world that brings the space to life. Here digital media, which is often thought of as a “cold” format, takes on an appealing sensitive and emotive dimension, with unusual graphic textures. - different visual tales recount the stories, anecdotes, modernity context and process behind this painting that has become an icon. Visitors meander through visual narratives that are simultaneously instructive, sensory and contemplative.

The origin of the myth

During his lifetime, Leonardo da Vinci made several portraits. At the height of his fame, at the age of 48, he began the portrait of Mona Lisa, who is also called «la Gioconda», a feminisation of her husband’s name. This painting became a challenge for Leonardo who wanted to give Mona Lisa a sense of life. Painted at life size, the Mona Lisa seems to be the most faithful representation of his quest for her creator. Leonardo da Vinci never handed over the portrait of his wife to Francesco del Giocondo, but kept it preciously close to him until his death, constantly perfecting it. It was at this price that he was able to render life on a poplar panel, to the point of making his contemporaries «tremble» at this miracle.

Like other painters before him, Leonardo da Vinci placed his figure in front of a landscape. While the Italian tradition had favoured the profile position up to that point, in the Northern European tradition the view is from three quarters and the gaze is turned towards the visitor. The framing offers a view of the hands coming to life. Above all, the master chose to paint the Mona Lisa with an expression that few artists before him had dared to portray: the smile. Leonardo da Vinci was therefore inspired by other pictorial traditions, in particular Flemish painting. But because he was able to capture the life of his model like no other, he created a masterpiece that still fascinates us five centuries later.

Every year, conservators, restorers and scientists also check its condition through visual examinations and highly sophisticated laboratory imaging. These analyses make it possible to know all the details of the painting, such as the shapeless brown area just above the parapet on the right, which is still an unfinished part of the painting. They also help us to better understand Leonardo da Vinci’s virtuoso painting technique and, in particular, his famous «sfumato» effect, in other words fading the contours and fusing the shadow and light to give Mona Lisa an impression of life.

The Mona Lisa was admired by his contemporaries during Leonardo da Vinci’s lifetime. From the moment of its creation, the Mona Lisa was copied and imitated. The painting was not yet finished when the young Raphael found in the Mona Lisa a powerful source of inspiration for his own work. It was then used for many portraits of women and men from all over Europe until the XIXth century. In the XXth century, artists ended up mocking or attacking the masterpiece that was becoming ever more famous.

The Mona Lisa has been stolen!

The Mona Lisa was very famous among art lovers and cultured citizens on the eve of its flight in 1911. The thief did not choose her by chance. But it was her disappearance for more than two years that made the Mona Lisa a very popular image. The case fascinated press around the whole world, who reproduced her image to infinity, marking the beginning of a kind of Mona Lisa mania that still exists today

Since the flight of the Mona Lisa in 1911, the image of the painting has continued to spread throughout the world. Its success grew continuously from the second half of the XXth century. The face of the Mona Lisa still inspires artists, especially in the new expressions of land art and street art. It is also an icon used in advertising and reproduced on thousands of objects. Each of the projects offers different visions and animations tailored to the content of each one

This exhibition is organized with the support of TikTok

♦  PROFESSIONALS, discover the different possibilities of exploitation of the exhibition: Private events, Hosting an exhibition in your institution.