Presentation of the exhibition 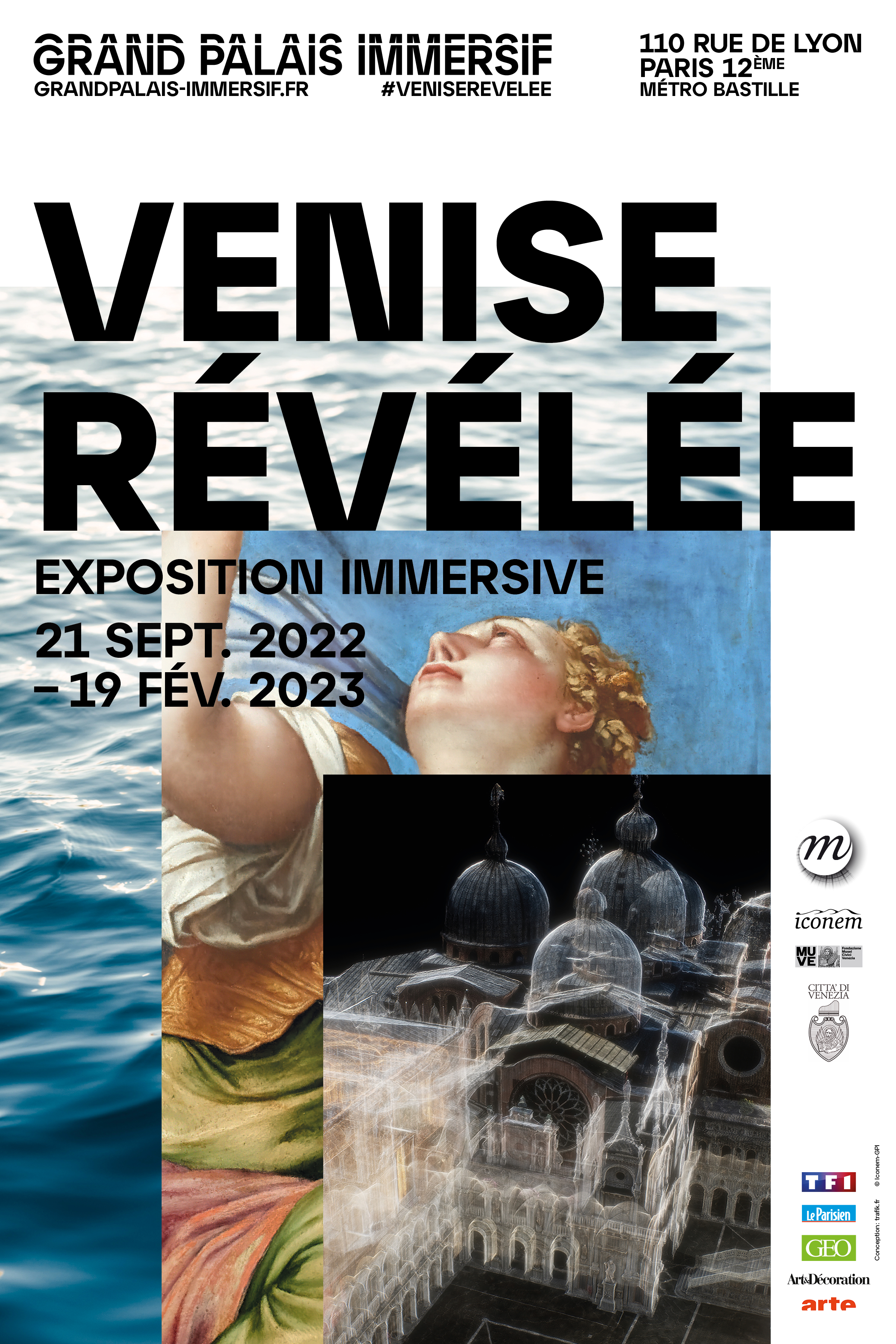 Grand Palais Immersif is a new venue, dedicated to programming immersive exhibitions, which will open in Paris this September.
The very construction of the city on millions of piles driven into the lagoon has made Venice a stage on which generations of Venetians have built the most sumptuous of sets. Behind these sets, the city is home to the exciting lives and dramas of its inhabitants. Venise appears apparently unchanged since the time of its splendor, and yet, thanks to imperceptible changes, has been able to adapt to changing lifestyles and fight against the constant threats of the sea. Far from being only a Museum City, Venice is especially a city of the future at the forefront of contemporary issues. The incomparable immersion generated by the totally new images of the digital exhibition "Venice Revealed" will allow us to feel and understand as never before the richness and complexity of this extraordinary city.

The invention of Venice is nothing short of a miracle, and this is what the exhibition Venice Revealed aims to help visitors discover and experience. A miracle of engineering, architecture and art, for several centuries this peerless city built on the unstable mud of a lagoon has been fighting the sea, which represents both a merciless threat and the source of its immense wealth. As they explore, visitors unearth the countless secrets and treasures that escape the eye when strolling through the city. To walk through walls and discover what hides behind them is the dream of all lovers of Venice, and is made a reality by the exhibition Venice Revealed.

The exhibition Venice Revealed offers visitors an unprecedented exploration of the backstage of the city, in its heart that carries within it all the dreams of beauty and splendor. It reveals to the public the foundations of this city-state set on the waters of the lagoon, the springs of an immense commercial power organized around the Grand Canal and its sumptuous palaces, as well as the original social and political organization of a Republic that has lasted for a thousand years.

Thanks to images offering completely new points of view, the exhibition also allows us to discover as never before the emblematic places such as St. Mark's Square, its Basilica, and the Doge's Palace. It offers a giga-pixel dive into the details of masterpieces of the greatest Venetian painters.

The scientific insight of the curators of the Fondazione Musei Civici di Venezia (MUVE), exceptional partners of the exhibition, allows the public to unravel the mysteries surrounding the Doge's city - a new perception of a mythical city, often known only for its tourist dimension, and which, despite facing deadly threats, continues to radiate to the world.
The exhibition is structured around four chapters, combining historical chronology and a stroll through the city's major sites:

THE LAGOON
Birth of Venice in the meanders of a lagoon
In the first section, we witness the birth of a unique city, set like a stage on a forest of stilts in a lagoon dotted with 124 islands. Thanks to its unique biotope and unparalleled engineering, revealed by the exhibition's never-before-seen images, the city has developed itself in front of Terra Ferma, until it spread throughout the Mediterranean basin.
THE GREAT CANAL
The Golden Age, Venice as a commercial and naval power
A radiography of a unique development in the world: a singular architecture and an original organization at the service of a commercial power, which is revealed to the public invited to a stroll along the Grand Canal and to the exploration of the wealth of its most beautiful palaces in 3D.
SAINT MARC'S SQUARE AND THE DOGES' PALACE, PLACES OF POWER
Venice, a political, economic and religious domination.
In St. Mark's Square, the exhibition explores the symbols of all the powers of the Republic, in particular the Doge's Palace, its origins, its history, its secrets and its treasures such as the famous Grand Council Chamber, the largest in the world, decorated with masterpieces by Tintoretto and Veronese.
VENICE, A CITY IN TRANSFORMATION, A CITY ALWAYS IN THE MAKING
Tomorrow, a new renaissance?
After the golden age, Venice is constantly reinventing itself. It is becoming part of modernity, reinventing itself as a unique center of artistic activity worldwide, with the Biennale and the many institutions devoted to contemporary art, and taking environmental issues head on thanks to the MOSE project -  this monumental system of sluices raised for the first time in 2020 -  but also to the many solutions invented by engineers to preserve the city for centuries to come. The visit ends with a reverie through an imaginary Venice, like an Atlantis submerged under the waters that is reborn from this Aqua Alta invented, ever more beautiful, for several centuries of influence.

All the images are extracted from a massive 3D model, created with drones by the Iconem team in 2021, which reconstructs thanks to photogrammetry technology the entire city in volume. This virtual universe recomposes with great precision by billions of points the urban space, the architecture of the palaces and the details of the paintings inside.
This digital material allows us to take a new look at the city and its architecture. These visualizations allow us to see through the material and, thus, to understand the structure of reality - both the set and the reverse of the set. Thus, the exhibition was motivated by the idea of revealing, through imagery, the internal structure that composes the architecture and the urban space to understand Venice in its technical, structural, scenographic and theatrical dimensions.

Throughout the course, the visitor switches from the real to the digital and vice versa. To do this, the 3D images are deployed in space on monumental panels in video, creating a thickness to the image in which the public penetrates or disappears. This image in volume recomposes the urban panoramas of the city of Venice using the same illusionist processes invented by Venetian painters such as Veronese in the 16th century or Giambattista Tiepolo in the 18th century.

By switching from a realistic vision to a more ghostly one, we visually pass from a real world to a digital one. This fluid and regular passage from one world to another is also present in the music and sound design, composed by David Chalmin.
Mixing acoustic and electronic instruments and sound design, this soundtrack accompanies the visitor in his journey and immerses him a little more in the soul of the city. Just as for the image, filters are used on the sounds to reveal the digital dimension of the sound material.

Interactive walks in 15th century Venice, created by Ubisoft from models of the video game Assassin's Creed II, amplify the immersion of the public by virtually projecting it into the spaces of the city.
Gabriella Belli, Director of the Fondazione musei civici di Venezia, general curator of the exhibition